Turning the Tide on Gender-Based Violence 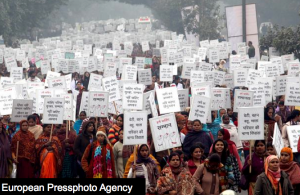 New Years celebrations in Delhi India were subdued this past week. Some were cancelled. The entire nation of India is galvanized by the rape of a 23 year old medical student by six men on a bus a few days ago. Indeed the world is in mourning at her subsequent death. Why? It’s not just the horrors of gang-rape, but the brutal truth exposed in its raw violence that women continue to be seen by millions of men as sex objects, prey for predators, sub-human and fair game.

In our ministry to orphans and widows, we at Visionledd are exposed to the gruesome reality of gender-based violence in Africa. Recently in Malawi, our strategic partner Somebody Cares initiated a Silent No More campaign, in which scores of women in the villages in which we work are standing up to rapists. These out-of-control men are suddenly being confronted by strong, united, Christian women who refuse to be abused. The impact is amazing. In fact the female justices association of Malawi have declared the campaign to be THE model for the nation in the mitigation of gender-based violence (GBV). Rape has been significantly reduced.

When Kathy and I began Visionledd 13 years ago we had no idea what lay in store. We were responding to a call from the Lord to care for orphans and widows impacted by HIV and AIDS. It didn’t occur to us that this involvement would grow into what it is today. But we’re as convinced as ever that we and our terrific staff are in the “sweet-spot” of God’s will for this ministry. And we’re also convinced that the Lord has led and is leading key, concerned friends like you to join us in the adventure of caring for “the least of these”- women and children in crisis.

As 2013 begins let’s affirm our commitment to “the lowest common denominator”. Let’s believe that together we can help make this a year of liberation for women.

Read about the community of Mtandile, Malawi – where an attack on 5-year-old Ester sparked its women to stand up for biblical justice and turn the tide on gender-based violence